What I Learnt about my Date while Playing Paintball 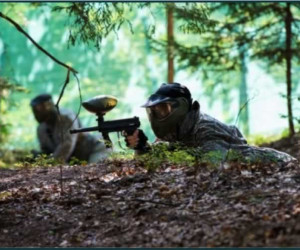 I had a date scheduled with an interesting guy, who, before letting me know the plans for our date, asked me hundreds of questions about what I enjoyed, didn't enjoy and maybe enjoyed about dating. I told him I was a care-free girl who appreciated guys who didn’t expect me to dress-up to the nines, with make-up and glitzy accessories. I told him that I often found dates to be too serious - almost resembling a grueling interview. As an easy-going girl, these kinds of dates were the worst. I laid it all out on the table, in hopes that this date would be different from my last. I detailed the few dates I had been on: letting him know what it was like, where we went and what we spoke about. After this, he gathered that learning and understanding the other person, was always my main goal.

After some time, he finally let me know where he was going to take me. His idea completely surprised me, excited me but also left me with a few questions. He said, after learning about my likes and dislikes, he thought a game of paintball was a good idea. I was thrilled to finally be doing something exciting on a first date instead of sitting stiffly at a table for two, talking about the weather. I thought he had some originality and imagination - this was definitely not the conventional type of date. But, I had one concern about paintballing on a first date. How was I able to really get to know this person, when we have face shields on and no way to communicate? I politely questioned him on this, in hopes he could settle my thoughts - which he did, but I still wasn’t fully convinced. I ended up telling myself that if I wasn’t able to learn anything about him, at least I got a chance to play paintball!

The day of the date arrived, and he whisked me off to an incredible game zone in the woods. Some of the props were from famous movie sets. We got given proper paintball attire, got briefed by professional marshals and all in all, I was pretty impressed. He clearly knew how to plan properly and choose the best spots. But, I was still wondering how exactly we were going to ‘bond’ over a game of paintball. I pushed the thought to the back of my head and decided to rather go with the flow of the day.

Fast forward to after the game - I can honestly say I had the BEST time I could possibly have had, and; the concern as to whether I’d be able to get to know him, was put to rest. In fact, I probably learnt more about this guy, than any other I had had a first date with, and I can detail exactly why. There is so much more to paintball, than just throwing on a protective suit, loading the gun with paintballs and firing off. The first thing I learnt was that paintball called for strategic planning. So, of course this taught me that my date was quite the organized type and pretty knowledgeable, too. He pulled out a pen and paper, mapped out our game plan and even came up with ways for us to communicate effectively as a team so that we had a better chance of taking victory over our opponents. We had code names, hand signals, and you could say we were fully prepared for battle. When we entered the course, he made sure I fully understood how to use the equipment to my advantage and said I’d be great. I was flattered that he was concerned and checked up on me. Gentlemanly chap, I thought.

Now, in the game of paintball, the best way to sneak up on your opponent, is to slowly move towards them, taking cover at every next ‘stop’. There should always be some members of your team in the frontline, some in the middle and some at the back. We decided that he be on the frontline, as this person would most likely be the one that the opponents saw first, and would target, if they managed to outsmart us. He said he’d prefer that I follow, so that I was better protected. I learnt that he was strategic and smart but also very thoughtful, which was earning him some serious brownie points. With all our ingenious moves and pre-planned tactics, we came out on top, taking the win with flying colors. We were clearly good at communicating and managed to work rather nicely as a team, surprisingly. After, all this was a first date and I didn’t know him very well at all. But what I did know was that he and I worked well together and knew how to have fun. It appealed to me that he didn’t take things too seriously and was up for something different. This was a plus, in my books! Of course, after the victory we had so much to celebrate! Over some celebratory drinks, we chatted and laughed, spoke about the game, our perfect execution and what we enjoyed most about paintball. The game allowed us to bond, which pleasantly surprised me, and the best of all - there was no time for awkward silences. Thank you paintball - you saved me from having to glare awkwardly at the opposite sex from across the table and make conversation about mundane things. Best date, by far!