Ottawans offered A Taste of the Arctic next Monday 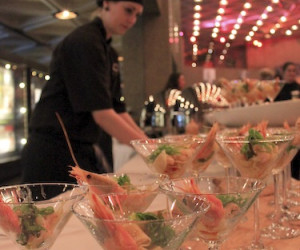 While Ottawa has the largest Inuit population outside of the Arctic, many Ottawans who don’t have ties to the North have few opportunities to experience the richness and diversity of Inuit culture.

Next Monday, an event offers Southerners an opportunity to sample the NAC kitchen’s take on a variety of Inuit culinary delicacies, with ingredients including arctic char, arctic berries, arctic shrimp, and muskox.  There’s also a generous promotional rate being offered to Apt613 readers: read on for details.

A Taste of the Arctic is a collaboration between Canada’s national Inuit organization Inuit Tapiriit Kanatami (ITK) and the NAC’s Executive Chef John Morris.  Now in its sixth year, the event has been praised as one not to be missed.

The event shows Inuit culture as both deeply rooted in tradition and also open to innovation and syncretism.  The entertainment at the event will include Inuit-inspired electronic and house beats from DJ Geronimo Inutiq of Montreal, a member of madeskimo, The Trade-offs, an Arctic soul band from Iqaluit, and a square dance band hailing from Nunavut Sivuniksavut, an Ottawa-based college program that serves Inuit youth from across Canada’s north.

A media preview for A Taste of the Arctic introduced journalists to some of these foods in their more traditional, and much simpler, preparations.

We were in for a treat: many of these foods are not frequently served south of the 60th paralell. Inuit living in Ottawa and other southerly cities eagerly await visits from family members bringing with them country foods like caribou and muskox meat, muktuk (beluga skin and blubber), and pitsi, also rendered as pipsi or pitti  (sun-dried arctic char).

Thanks to ITK’s longstanding collaboration with the NAC, however, pitsi is now on the menu at Le Café, where it is served in a citrusy risotto along with roasted acorn squash and a crab & tomato hollandaise.

We ate these foods in their simplest form: served raw and frozen, sliced into bite-sized pieces with the curved blade of an ulu, which one ITK staffer jokingly referred to as “the world’s best pizza cutter”.

I was especially curious to try muktuk.  The beluga skin is quite tough, which is why it is generally served cut and scored with an ulu, as was done for us.  While the hardy, rubbery texture was a bit of a challenge for me, I enjoyed the delicate, slightly nutty flavour that the fat releases when warmed in the mouth.  It’s now popularly served with a bowl of soy sauce for dipping: apparently China Lily is the preferred brand, although there was some dissent among ITK staff on that matter.

I was also interested to learn that muktuk is extremely rich in Vitamin C, and that the nutrients it contains are best preserved when it’s eaten raw or frozen, as is the tradition.  The oil and livers of cold-water fish and mammals are also an important source of Vitamins A and D for Northern people with little access to fresh vegetables.

The versions of these dishes that will be served at A Taste of the Arctic will combine centuries of Inuit culinary tradition with European flavours and techniques, making them more approachable for the curious but unfamiliar.  For some, it will be an exciting opportunity to try something new.  For others, it promises to be an inventive twist on familiar traditions.