Celebrities With Their Own Drinks 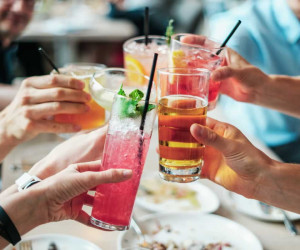 Being a celebrity has its perks. The money. The fame. The women. And men. But a recent trend has celebrities putting their name on pretty much everything. All to earn money and further promote “their brand”. And while clothes and perfumes are the first things that come to mind, in this article we are exploring something a bit more unusual. Celebrities that have their own drink.

Starting off our list is Rayn Reynolds, the star of Deadpool. Ever since 2018, Ryan Reynolds has held a stake in Aviation American Gin. Of course, using his star power, Ryan wanted to have control over the creative direction the brand was heading and was determined to play an active role in the business. And so in June 2021, a hilarious commercial for the cocktail “Vasectomy” which includes his Aviation gin was launched with Reynolds as its only star.

In it, Ryan shows us how to prepare the cocktail while having an interesting take on fatherhood. While his words describe it as a joyous role we can clearly see he is struggling with making the cocktail and doesn’t really believe his own words. Of course, he is making fun of the idea that being a parent is all sunshine and rainbows when in fact it is a very responsible and demanding role. And so at the end of the commercial, he loudly cheers for vasectomy.

Aaron Paul and Bryan Cranston Launched One in Pair

Bryan Cranston and Aaron Paul didn’t just co-operate on Breakin Bad. They launched their own drink together as well. It is not surprising considering the series was so popular that they wanted to make a little bit extra with this project, because everyone did. So much so that it even has an online slot casino game named and modeled after it. It features symbols for the main characters (Jesse Pinkman, Walter White, Hank Schreider, and Skyler White) along with elements from the periodic table (Ag), gold (Au), platinum (Pt), nickel (Ni), and copper (Cu). Also, there are wild symbols, which feature an image of the famous RV that was used by the main characters in the show to cook meth. The final symbol are the bonus symbols, which use the Breaking Bad logo, barrels of cash, and other symbols from the show.

In 2019, the duo launched their very own mezcal (a drink similar to tequila) called Dos Hombres. Using their fame from Breaking Bad and knowing the public will go nuts seeing them together again, the marketing was spot on. No need for any clever or funny plot, pictures on Instagram and the web page of the drink just show Aaron and Bryan smiling while drinking Dos Hombres in the sunset.

The page also describes the roots of the drink. “A unique blend of the finest Espadin agave, hand-selected from the hillsides of a small village in Oaxaca, Mexico.” Simple and nothing special, but when you are Bryan Cranston or Aaron Paul it is more than enough to get people interested.