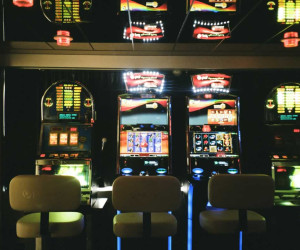 Cyberpunk isn’t just a theme or a fashion. To some people, it’s a whole way of life. The powerful combination of steam-age visuals with space-age technology is a potent one, and it’s inspired hundreds of great works of fiction. Some people credit the movie ‘Blade Runner’ for inventing and popularizing cyberpunk, but the reality is that the concept existed long before that. There are even some people who don’t believe that ‘Blade Runner’ is really cyberpunk at all! We’re about to see the genre in the press in a big way again thanks to the impending release of the Keanu Reeves-led video game ‘Cyberpunk 2077,’ but standard video games aren’t the only place cyberpunk has had an influence recently. It’s also been making big waves in the world of online slots.


When casinos went online shortly after the turn of the centuries, the slots you played on them looked broadly similar to the slots you would play in bars and bingo halls. They've evolved significantly in the time since then, and these days online slots come in a variety of different shapes and sizes. There are online slots based on your favorite sports teams, your favorite movies, and (of course) your favorite fictional sub-genres. The only limit to making a good online slots is the imagination of the person making it, and some of the people who make online slots are very imaginative indeed!

We’ll start right at the top. ‘Fortunium’ by Stormcraft Studios has been making big waves as a cyberpunk-themed online slots game for two years now, and we don’t anticipate it losing any steam (if you’ll excuse the pun) any time soon. Drawing liberally from both the science fiction dystopia of Blade Runner and the 1927 Fritz Lang movie ‘Metropolis’ (another film that sometimes gets credit with inventing the genre), this is a beautiful slot set in a mile-high city in the distant future, with a cast of characters to play with as they seek to establish dominion over the city and its people. It’s a massive slot in terms of layout, with five reels, five rows, and forty ways to win, all of which is backed up with a return-to-player rate of 96.47%. Regularly-appearing mystery and bonus symbols keep things interesting, with a great free spins feature thrown in for good measure.

Sometimes, the clue is in the name. If you can look at the title of this creation by Woohoo Gaming, we don't know what to tell you. This is most definitely a cyberpunk-themed online slots game, and it's also most definitely set in a combat situation. Woohoo aren't the biggest name when it comes to the design and production of online slots, but if this is anything to go by, they perhaps deserve more recognition than they currently receive. Released in March 2020, this is a five-reel, three-row online slots game with 20 ways to win and 96% RTP. As is the case with many modern video slots, it comes with a backstory to go with the action on the reels. This is an apocalyptic city patrolled by high-tech rebel forces, and your choice of character will have a measurable impact on the outcome of your game! That means you should choose wisely, and keep a close eye on all those expanding symbols, massive multipliers, and additional wilds.

While it's a cliche to tick the word 'Neo' in front of anything and turn it into a science-fiction title, it works with 'Neo Tokyo' by Ganapati. This is an online slots game so experimental that it almost exists outside the genre. There are no reels and rows in this layout; instead, we have a crystalline cluster system arranged in alternate layers of threes and fours, into which 12,348 ways to win have been packed. That might sound confusing, but the fact that the RTP is 96.09% means that wins still turn up semi-regularly whether you understand what's happening when you spin or not. There's an ongoing story being told in the game about a policeman who's in love with a girl called Hana, but competing for her affections with a gangster named Deadspin. This might be as close to a movie as online slots get, and it's a lot of fun to play.

'Code 243-0' might not have the catchiest title in the world, but don't let that put you off the idea of taking its five reels for a spin. It's clearly been influenced by 'the Matrix' quite heavily - or at least we assume that's why the characters have latex clothes on,' but it's a thematically strong and atmosphere-heavy cyberpunk thriller of a slot by Spinmatic. RTP is a little low at 93.5%, but medium volatility means that you don't generally have to wait especially long for a worthwhile win to turn up. There are also a lot of bonus features on hand to spice up those wins, including expanding wilds, multipliers with free spins, additional wild and scatter symbols and randomly-occurring multipliers during the base game. While all of this is going on, your character Code 234-0 (a rogue cyborg) battles with evil corporations and assassins to control this futuristic sky city.

This online slots game by Reel Play isn't especially subtle about its theme and makes no attempt to be complicated with its gameplay, but we're not holding either of those factors against it because it comes with an unashamed focus on fun. As the slot's name suggests, you play the role of a bounty hunter in a city of the future, on the trail of three notorious criminals. Catch the criminals, and huge wins are on the cards for you! This is a 5x3 slot with a modest 95.54% RTP and only 25 paylines, and there may only be wild symbols and free spins in the way of bonus features, but that isn't where the fun comes from. Instead of worrying about the comparative lack of features, focus on the fact that you can earn extra wild symbols on every spin by literally shooting at the symbols on the reels! It's not quite 'Time Crisis' (there's a reference for the retro gamers among you), but it's the next best thing as far as online slots go.