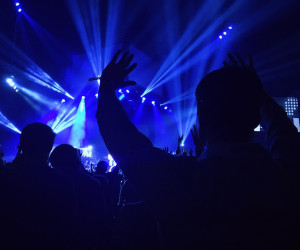 There is no denying that Adele is one of the biggest music stars on the planet! She has won countless Grammys, broken many records, and her music touches the hearts of people from every corner of the world.

Witnessing Adele perform live is a true treat - something you will cherish for the rest of your life!

With that being said, let’s take a look at three fascinating Adele live music facts:
1.   Adele is the priciest R&B singer for fans to follow

In our recent report on the cost of being a music superfan, we found that it was rather pricey to follow London’s golden girl. Here is an extract from the report:

“The powerhouse singer Adele is crowned the priciest R&B singer for fans to follow, costing Adele devotees £4,424.58 to be fully dedicated to the star.

“Admirers of Adele wanting to see the soulful singer perform tracks from her new album, like ‘Easy On Me’, are expected to pay an enormous £548.63 per resale ticket.  Superfans that attended all seven of Adele’s UK shows in the last five years could have spent £3,840.41 in total.”

2.   Adele sold out Hyde Park in a matter of minutes

Earlier in the summer, Adele performed two shows at Hyde Park. It was her first UK tour in a number of years, and thousands of fans queued to get their hands on tickets.

Unfortunately, many were left disappointed, as the show sold out in a matter of minutes. In fact, lots of fans reported getting through to the booking portal at 10.01 am (a minute after they went on sale), only to find that there were already no tickets left.

The shows were memorable ones, with an all-female support show. Her childhood favourite, Gabrielle, was the chief support on the bill.

Adele’s headline set will go down in history as one of the greatest at Glastonbury. She dazzled the audience with all of her top hits and her charming personality.

However, this was not the first time that she graced the festival. In fact, she performed in the Guardian Live Lounge in 2007. Even Adele had to start somewhere!

Fast forward to 2016, and she headlined the Pyramid Stage, despite calling it her “biggest musical fear.” t was an emotional night for the superstar, but one of true triumph.

Have you seen Adele live before?

Have you had the privilege of seeing Adele live before? Her tickets can often feel like gold dust! The demand is always so high. However, it is always worth the effort.

Adele has an incredible voice, but she also has the amazing ability to connect with each and every one of her fans. She still feels like that Tottenham girl who burst onto the scene when she was just a teenager with Hometown Glory!