Top 5 Sports Arenas You Have To Visit 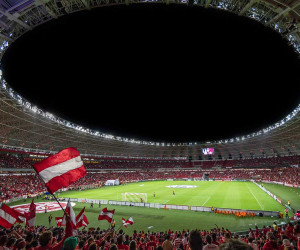 Don't get us wrong, if you're a sports fan it's easy to get your fill without leaving Ontario but they won't necessarily be bucket list worthy.

If you want to combine the passions of sport and travel then these are five sports arenas you have to visit.

We couldn't have this list and not give a nod to Canada somewhere. As sports arenas go the Olympic Stadium in Montreal is well worth a look. The now 64,000-seater isn't the biggest you'll see but the design and architecture of the stadium is up there with the best of them.

Around the stadium you've got landscaped parks and gardens, chic and trendy bars and restaurants popping up like nobody's business just a stone’s throw away and, if it's your thing, you can take in Montreal from above courtesy of the Observatory at the top of the 574ft tower - the largest incline tower in the world.

Anyone who knows baseball will know that attending a game is about much more than the game itself. That’s very true of baseball in Pittsburgh; their recent record has been somewhat underwhelming with player trades just one element feeding their decline. So, we cannot guarantee a great spectacle of baseball from the home team.

Why is PNC Park on the list then? Well, it’s the most beautiful stadium in the MLB. Providing you avoid the area of the stadium where you have your back to the view, you’ll have plenty to keep your eyes on away from the action itself. The Pittsburgh skyline awaits.

Is the Maracana a stadium surrounded by a host of tourist attractions and top eateries? No, it isn't. There is plenty of that in Rio though so you'll get your travellers fill and then some whilst staying in the city. Why then does the Brazilian stadium feature on our list? It's iconic, that's why.

The Maracana has hosted two World Cup finals, which is something only a few other stadium can brag. You'll find a museum attached giving a comprehensive walk down memory lane of Brazilian football, which is quite the treat. If you can get tickets to a game then you'll be in for a real once in a lifetime experience with the 79,000 capacity stadium likely to serve up an electrifying experience.

Madison Square Garden has hosted some of the biggest sporting events of all time whether that be Stanley Cup finals or NBA Championships between the best teams in the league (click here to find out the current NBA odds).

It remains one of the must visit arenas in world sport. It's not just about the history drenched arena itself though. It's everything that goes with it.

Outside you're slap bang in the middle of Manhattan. You've got bustling streets and an abundance of eateries. They're complemented by quiet parks and dizzying walks that, if you complete, will treat you to views over the Hudson River. If you decide to take in an event now, your best bet will be either the Rangers of the NHL or the Knicks if basketball is your thing.

English Premier League outfit Tottenham rebuilt their stadium in North London for a total cost of over $1bn in just 2019. It is the newest stadium in England and it's by far the best too.

The main reason for that is the fact it's so much more than a stadium. You've got the option of completing the Dare Skywalk, which will give you views over the city and also the possibility abseiling down onto the pitch.

If heights aren't your thing then you can still benefit from the micro-brewery Spurs had built in one corner of their stadium whilst drinks at the Goal Line Bar will mean you can enjoy a tipple at the longest bar in Europe or perhaps just grab a meal at the on-site Michelin star restaurant.

If that's not enough then you might be able to catch a glimpse of Jose Mourinho; the Tottenham gaffer is one of the greatest football managers of all time.

There you have it, five sporting arenas for the travel fanatic. Which one should we have included? Let us know!