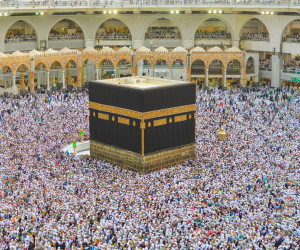 You may have seen in the news recently that Saudi Arabia has had a little bit of bad press - and by “a little bit” we mean absolutely loads of it. In light of the apparent murder of American journalist Jamal Khashoggi in a Saudi embassy in Turkey, eyes have been on every Government in the civilized world, and how they respond to the tragic incident. The Germans have canceled arms deals with the Saudis, and pressure is mounting on others to do the same.

It isn’t just world leaders who have been expected to act, either. Major businesses and business leaders had been due to descend on Saudi Arabia for a major conference called the Future Investment Initiative, which as well as being a major networking event, was an opportunity for Saudi Crown Prince Mohammed bin Salman to show off his vision for a modernized Saudi Arabia of the future. The event was supposed to be about Saudi opening its arms to the world, and engaging in the 21st century. In the aftermath of the Khashoggi incident, every major sponsor pulled out.

One company that went ahead with its planned trip to Saudi regardless, though, was Vince McMahon’s World Wrestling Entertainment.


Before we rush to condemn WWE, we should point out that they’re not the only company who are continuing to do business with the Saudis in the current environment. BlackRock, SoftBank and a whole mess of financial institutions and investment companies have confirmed they’ll carry on trading there. US President Donald Trump has stated that withdrawing from a lucrative arms deal with the state would put too many US jobs at risk. Where there’s money heavily invested in such deals, business has seemed to continue as normal - or at least, as normal as is possible, given the situation. But WWE aren’t a bank, or a financial institution, they’re an entertainment company.

To give proper background into the fact that the planned ‘Crown Jewel’ event went ahead last weekend, the Saudi deal is a major boon for the company. The Saudis are effectively paying WWE - and paying them handsomely - to come to the state every six months for the next ten years, and stage a major event. The first event, named the ‘Greatest Royal Rumble’, went ahead in April without a hitch. It was an odd watch; a mixture of pro wrestling and pro-Saudi propaganda - but it didn’t court major controversy for the company at home. This second event saw WWE roasted on HBO by John Oliver. The eyes of the world were watching, and WWE has been seen to commit a party foul.

A Show Of Defiance?


The company structure of WWE is unusual for a publicly traded company. Although anyone can buy shares in the corporation, and as such it has a responsibility to its shareholders, in real terms all of the power remains in the hands of the man who founded it; Vince McMahon. And Vince McMahon isn’t a man who’s ever had an issue with courting controversy.

This is the same Vince McMahon who was placed on trial in the early 1990s for dealing steroids to his own wrestlers, although he was cleared of all charges. Vince McMahon’s company brought the world ‘bra and panty’ matches between its female competitors throughout the 1990s. Storylines portrayed on WWE television have included necrophilia, miscarriage, Satanic rituals, and an octogenarian giving birth to a hand. He’s never previously shown any concern with regard to what other people thought of him or his conduct.

He’s also someone who likes to take a gamble. In case you’ve forgotten, Vince McMahon also gave us the ill-fated XFL in 1999; a sport which attempted to combine pro football with pro wrestling, and succeeded at neither. Despite that, he’s intending to revive the league and try again in 2020. Past forays into other fields of entertainment have included a movie production company, and a competitive bodybuilding league. We wouldn’t be at all surprised if he spent all of his free time playing VIP Casino games. He likes to take risks, he likes to play high stakes games, and he doesn’t mind losing the occasional bet so long as he wins the next one. The question with the ‘Crown Jewel’ event is whether he’s backed a winner in the long term.


Although precise figures aren’t available because of the way WWE breaks down its financial reporting, experts believe that the WWE-Saudi deal is worth something in the region of $45m per year to the wrestling company. That’s $450m over the ten year term of the deal, and certainly isn’t an amount any business or individual would turn their back on without giving careful consideration to.

At the same time, that money isn’t as important to WWE now as it was when they signed the deal toward the start of the year. Since that first event, WWE have been through their latest round of TV deal negotiations, and boosted their future revenue by an astonishing amount. They signed a five year deal with FOX for SmackDown, one of their flagship shows, for a total value of $1bn. Their other flagship show, RAW, will stay on the USA Network for the same length of time, and is understood to have attracted a similar price. Basically, the Saudi deal is a much smaller chunk of WWE’s income than it was at the time. Losing it wouldn’t be the be-all and end-all for WWE if they walked away from it, which makes their decision not to seem questionable.

There’s also those shareholders to think about. Although Vince McMahon may still have ultimate control, he has investors expecting returns on their money. WWE’s announcement that the Saudi show would continue as planned saw their stock dive 21%. That’s no small amount. It had been riding at an all time high prior to the announcement, so no material damage was done, but another fall of the same value would surely set alarm bells ringing on Wall Street, which WWE would presumably be keen to avoid.

In the cartoon world of professional wrestling, the battle against negative media attention might be one matchup that not even Hulk Hogan, Stone Cold Steve Austin and the Rock together would be able to win.