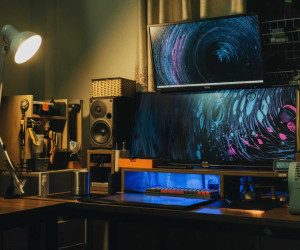 2020 was the year we all found out how much we love video games. With so much spare time on their hands, people suddenly found that they had the chance to get re-acquainted with their games consoles after years away. Some people even bought consoles to get them through lockdown and quarantine periods, rediscovering the gaming habits they used to have in their teens. Fortunately, we weren't short on great games. With the new generation of consoles beginning to show what they're capable of, there's never been a more exciting time to be a gamer.

Great gaming hardware is nothing without great games to play on it, though, and if there weren't incredible new games on the horizon, we'd have nothing to look forward to. For that reason, we're happy to be able to tell you that 2021 already looks like it's going to be a vintage year for games. Provided everything goes to plan and there are no delays, we'll see some stellar releases during the next twelve months.

Nobody has the time (or the money) to buy and play every new game that comes out, so you might be wondering what's likely to be worth your attention so you can make purchase plans in advance. We've got your back on that front. This article is only our opinion, but it's our take on the biggest and best games scheduled for release in 2021.

It's not often that a game proclaims itself to be the first of a new genre, and it's not often that there's any such thing as a new genre at all within the plethora that already exists within video games, but "Deathloop" wants to break that trend. This is a game that's being described as a "time loop shooter" and might owe a thing or two to the Bruce Willis movie "Looper" from a few years ago. Strangely for a game with such a futuristic premise, "Deathloop" is set in the 1960s and puts you in charge of an assassin who has to kill eight targets before the clock strikes midnight. Unfortunately for you, there's also an assassin on your trail, and if they get to you before you finish your job, you're doomed to repeat the whole process again. This will either be repetitive to the point of intense boredom or incredibly compelling, and we're interested to see which way it goes.

This is a “Resident Evil” game. Of course it’s going to be good. We almost never see bad “Resident Evil” games, and those that have missed the mark tend not to be connected to the main series. As the first “Resident Evil” game to arrive on the latest generation of consoles, this should be spectacular. The game’s announcement took the world by surprise in the PS5 showcase event last year, and it was thought at the time that it might be close to completion. Sadly it wasn’t ready in time for the PS5’s launch day, but it should arrive reasonably early in 2021 and welcome us back into a nightmarish world of zombie-dodging horror. Well, that or zombie-hunting horror, depending on how you prefer to play the game.

The "Far Cry" series is a strange one. It's been hugely successful, it has a devoted fanbase of millions of players, and yet it's never captured mainstream attention in the way that many other gaming franchises have. We don't know why that is, but we won't complain about it too much so long as Ubisoft carry on making them. We're not entirely sure when to expect the sixth installment in the series yet, but some of the reports we've seen suggest that May 2021 isn’t out of the question. Ubisoft practically wrote the book on open-world games, and so far, they've managed to take that concept further with each new "Far Cry" release. We admit to being excited about how far they can take that concept now they have even more powerful hardware to play with, and so we're expecting the biggest "Far Cry" yet. We'd be more confident about getting that if the game hadn't been simultaneously developed for last-gen consoles, but we live in hope.

This is a "Halo" game. People will buy it even if it's terrible. That's the stage we've reached with "Halo" games, and perhaps it's a fact that 343 Industries have been relying on for too long. To some fans, all the fun went out of the "Halo" games when Bungie stopped making them, and so "Halo: Infinite" is an opportunity to break new ground and prove the doubters wrong. Given the fact that Joseph Staten is back on board, even if Bungie isn't, it might stand a chance of doing just that. Amazingly for a game of this stature, it's going to be offered free of charge with Xbox Game Pass subscriptions. That makes its release a major event not just for 343 Industries but also for the Xbox as a whole. If this doesn't go well, the Xbox Series X will be doomed to take second billing to the PlayStation 5 for the rest of its existence. It really is that important, and so it has to be right. We've been promised nothing short of a multiplayer revolution. That's a bold claim to make, so let's hope it's rooted in fact.

Like "Far Cry," the "Hitman" series is one that doesn't always get the respect it ought to get from the media or the gaming community. That's despite the fact that it's been adapted into two movies and has also found success at UK slots website through the official "Hitman" online slots game. The history of video games crossing over and becoming successful with online slots players is patchy at best, but "Hitman" is one that's proved to be just as popular with gamblers as it has with conventional video gamers. We wonder if they'll make an online slots game based on this latest edition? The fact that it allows maps to be imported from the previous two games is a good start, as is the promise that up to 300 NPCs can be on-screen at the same time without crashing the system. Having said that, the makers of "Cyberpunk 2077" promised us that, too, and look how that turned out.

If you own all five of these games by the time 2021 is out, we’re confident that you’ll have had a good time. Will we be right? Will we be wrong? We’ll only know that in a year’s time, so feel free to come back and tell us if we made mistakes!