Sports Movies that have hit Home Runs at the Box Office 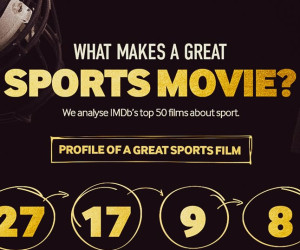 No matter the country, no matter the season and no matter the state of the world, people love sports. They always have. The respiratory disease had basically put all of our lives on hold and yet, all sports leagues around the globe were working night and day planning their return. Dana White, president of the UFC, had even planned to hold fights on what he called the “Fight Island”. No such thing as a worldwide pandemic would stop him from achieving his goal.

While sports leagues executives were hustling, the rest of the world stayed inside binge watching movies and TV series and did it all again the next day. Let’s be real, during that time the best substitutes to sports live events were movies about sports. And there are many of those out there. In fact, according to IMDB, there are currently close to 4,100 titles labelled as sports movies.

Who has never dreamed of driving one of those sports cars in one of the gazillion Fast and the Furious titles or throwing a knockout punch in one of the Rocky movies? You don’t have to be a jock full of hormones, a lover of sports or even know anything about them in most cases and that’s the beauty of those movies. Simply put, a great story makes a good movie, no matter what it’s about. When well written, a sports movie will dig much deeper than the sport itself. The popular ones such as Any Given Sunday (starring Jamie Foxx, Al Pacino and Cameron Diaz) and 42 (starring Chadwick Boseman) are full of inspiring quotes, with loads of drama and filled with memorable action scenes. Everyone loves them and it shows at the box-office.

The Fast and Furious franchise has grossed over $5 billion worldwide combined, thanks largely to its international success. The last two movies in the series, "Furious 7" and "The Fate of the Furious," both made over $1 billion worldwide, with the majority of the box office coming from overseas markets. The Rocky franchise on the other hand made more than a billion dollar worldwide with its seven movies.

Athletes make perfect material for the screen. They spend their lives training, crafting their moves, to the point of obsession and leaving everything and everyone behind. The stories don’t have to be complex either. It can be about an athlete having one last chance like in The Replacements (starring Keanu Reeves), a stubborn English boy dreaming of Olympic glory such as Eddie the Eagle (starring Taron Egerton and Hugh Jackman) or a bunch of young misfits learning to play a sport together such as The Mighty Ducks (starring Emilio Estevez and Joshua Jackson). The stories outgrow the sports and become a metaphor of life where courage, teamwork, and perseverance eventually pay off. Just as in an online casino, there is a winner and a loser.

Many of these movies don’t simply leave their mark at the box office, they also become critically acclaimed and win big awards. Million Dollar Baby (starring Hilary Swank, Morgan Freeman and Clint Eastwood) grossed close to $220 million worldwide and won a few awards at the Oscars including Best Motion Picture of the Year, Best Performance by an Actress in a Leading Role and Best Performance by an Actor in a Supporting Role. In 1977, the first one in the Rocky franchise paved the way with sports movies by garnering Oscars for Best Picture, Best Director and Best Film Editing. Then, it also won Best Motion Picture - Drama at the Golden Globes.

Hollywood knows too well that audiences all over the world love a good story about struggle, redemption and success and sports movies are perfect to explore these themes.There are already dozens of titles confirmed for 2021. Australian actor, Chris Hemsworth (known for playing Thor) confirmed he will be playing the legendary American wrestler Hulk Hogan in a biopic. Space Jam: A New Legacy starring superstar Lebron James will also come out twenty-five years after Michael Jordan played in the first one. There’s even another Muhammad Ali currently being developped and planned to come out next year.

Sports movies just like sports live events have this capacity to draw large audiences all over the globe. So when the next blockbuster sports film comes out, you can rest assured that millions of people will be there to watch it.