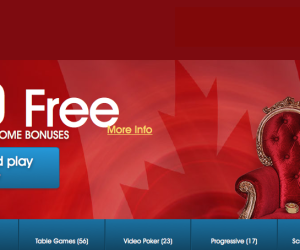 Hey - someone has to win sometimes right? Believe it or not, yes they do even when those slots machines with vast jackpots have odds running into the hundreds of millions. Fact is that so large is the slots industry that with so many players, sooner or later the jackpots going to drop. It's not surprising to see that the majority of the biggest slots jackpots winners take place in Vegas, so for the sake of keeping this article interesting we'll throw in a few of the most memorable wins too.

Before we get started it's going to interesting to see forthcoming massive wins with the online slots operators. The famous Royal Vegas Canadian Casino already have some huge jackpots on offer. As more and more players take up online slots through premium operators such as their Royal Vegas Online Casino, it's safe to say it won't be long away. Many predict that many major online casinos will over the next few years become less interested in attracting players with sign up bonuses, and more about retaining players with the promise of large jackpots. Given the take up of online slots in the last few years, it'd a be a safe bet it's an accurate prediction.

But for the time being, here's a lowdown on some of the biggest and best slots jackpots winners so far.

1) Largest Win For A Mobile Player

Rolling on from the above let's start off with the exciting new world of online slots. To date the largest slots jackpot was won by an unnamed 50 year old man playing on his mobile. He cleared a very cool $1.4m - beating the previous $1.1m record set only a month before. Odds are against him keeping that record much longer!

At time of writing the home to this pay out is the Excelsior Casino right on the strip. In 2003 a young computer engineer placed a crisp $100 into the Megabucks machine. A few minutes later he's converted that note to a mind boggling $39.7m - now try fitting that in your wallet.... Oh he beat odds of over 16m to 1 too!

It was a penny Megabucks machine that paid out over $18m in the Pahrump Nugget Casino in Vegas. The lucky player, a 66 year old two usually stayed shy of penny slots but decided to try his luck, dropped the jackpot when down to his last $44. Now usually i'm all for cutting your losses but if there's ever an example of 'well you never know' this has to be it!

Sometimes it pays to be suffering a little light insomnia, and a mid twenties gent in Norway decided to while the night away with a few small stakes. Playing on his home PC, he maybe thought he was dreaming as after a small session he was left with a life changing 11.7m Euro payout! Amazingly because it was during the night and the care lines weren't available he had to wait until the following morning to confirm that his life would never be the same again.

5) Best Example Of Breaking The Bankroll

Currently the third highest slots jackpot winner in Vegas history, a 67 year old retired flight attendant scooped $27,580,879.60 (don't forget the .60!). This was back in late '98 and the lady in question had intended to limit her bankroll to just $100. Not once, but twice she replenished her bankroll for a grand outlay of $300 altogether. Apparently this was most unusual of the usually rather restrained player. But hey, if you can afford it...