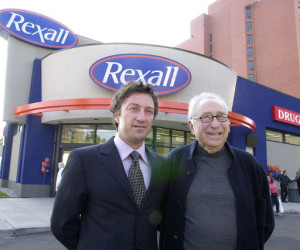 The sale, which is still subject to regulatory approvals, would see the Edmonton-based Katz Group transfer Rexall's 470 retail pharmacies to McKesson.The Katz Group and McKesson have worked together for more than 20 years and said the announcement marks a "natural next step" in their relationship. McKesson had also previously acquired Katz's independent outlets and franchise businesses – primarily operating as I.D.A. and Guardian – for about $920 million in 2012.

The deal will expand McKesson's footprint in a country where there is a wealth of opportunity, said John H. Hammergren, chairman and CEO of the San Francisco-based firm.

"Canada's healthcare environment is rapidly evolving; it is marked by a move of primary care into pharmacy and increasingly complex patient demand," he said in a news release Wednesday.

"With today's announcement, McKesson will bring together the strengths and expertise of our diverse portfolio to address challenges and opportunities in delivering the very best patient care."

McKesson said it will have 13,000 employees after the Rexall deal closes, which is expected to happen later this year.

Rexall Health will continue to be led by its current management, headed by CEO Jurgen Schreiber. Schreiber was the former head of Canada's largest pharmacy chain, Shoppers Drug Mart, which is owned by Loblaw Companies Ltd. (TSX:L).

McKesson said the acquisition will help the company drive growth through its fastest growing regions, Ontario and Western Canada.

RBC analyst Irene Nattel said the deal, which will be funded by cash and debt, was not entirely a surprise.

"As a major supplier/distributor to the retail pharmacy segment in Canada, McKesson has been systematically extending its presence at the retail level through the acquisition of independent pharmacists and development of new retail locations," she wrote in a note to clients.

"The acquisition of the Rexall corporate network gives McKesson a strong foothold in Ontario, and should provide stability to the operations as they will now be part of a large, well-capitalized organization."

Since McKesson was already acting as a supplier to Rexall, Ms. Nattel doesn't believe this sale will have any "significant implications" to its competitors, Quebec-based pharmacy giant Jean Coutu (TSX:PJC.A) or Shoppers.

In recent years, Rexall has been revamping its pharmacies and introducing new private product label lines in grocery and cosmetics as it faces stiffer competition in the drugstore market.

The founder and chairman of Katz Group, Daryl Katz, said his company will continue to invest in its three other types of business – real estate, sports and entertainment, and investments.

"I have the utmost confidence that Rexall Health will continue to flourish under McKesson's ownership and Jurgen Schreiber's continued leadership," Katz said in a joint statement with McKesson.

Both McKesson and the Katz Group declined interview requests.