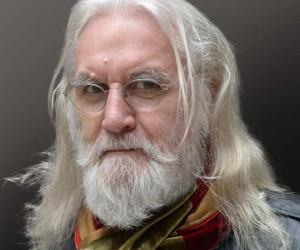 Billy Connolly, quite possibly the funniest person in the United Kingdom, is bringing his stand-up routine back to Canada, and is including Ottawa.

Connolly, who was voted by Britain’s Channel 4 as “the best comedian of all time,” will perform at the National Arts Centre in Ottawa on Oct. 23. The High Horse tour will also tour from Halifax to Victoria. See all dates below.

Connolly has a long list of movie and TV credits, including the films Mrs. Brown, Boondock Saints, Pochahontas and The Hobbit. He has hosted his own TV shows, including tours of Scotland and Route 66 in the United States, and has appeared on House, Third Rock from the Sun and many others.

Tickets go on pre-sale July 6, and full sale July 9 through Ticketmaster. Prices were not available at time of posting.