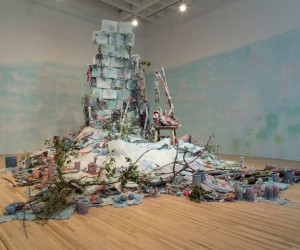 “Is it cooler in this room, or is it my imagination?”

Yes, AXENÉO7 director Stefan St-Laurent explains, the room we’ve just entered is slightly cooler than the room we came from, due to this room’s lack of exterior windows.
For a moment there, I thought that Tricia Middleton’s installation at the Gatineau exhibition space had tricked me into feeling chilled, as if her art had the power to control, merely by suggestion, the temperature inside the gallery, or to control my perception of the air around me.

As it turns out, the chill affects my perception of the art itself. The walls in this, the second of three rooms that the Montreal artist has filled with large, rambling installations, are splashed with watery paint in blues and greens that make me think of a cold sea.

In the middle of the room are wax-covered bricks that Middleton made and stacked like the precipitous ruins of a long-abandonded castle. It looks like it could collapse at any moment onto the agglomeration of things scattered around its base — old shoes, paint cans, twigs, wine glasses, bottles, a stool, all of it covered in a dripping coat of wax that gives the scene a feel of being a frozen, forgotten place. Somehow it all achieves “a kind of harmony,” as Anna Brunette writes in the exhibition notes.

This harmony is achieved in each of the three large installations that make up Injurious Nature. In each room, Middleton has brought together hundreds, perhaps thousands, of items that transcend their randomness to make a subtle, unified comment on material culture and its intrinsic wastefulness. Precisely how any viewer perceives the comment hinges on how the installations are seen. My sense in room one was of a giant memento mori, or perhaps a funeral cortège, made of a vaguely processional arrangement of skulls, candles and objects that, lacking any measurable aesthetic or monetary value, may be souvenirs of a life.

The third room is filled with words and artifacts arranged against a wall, to a flatter effect. I think of impromptu memorials to the famously dead that fans leave on gates and doorsteps. Yet the texts turn the work into a monument to the frustration of the artist — “I really doubt you’d be interested in my art practice, it’s very visual” — and of the found object — “Those f-ckers dumped me in the trash and it was a long way out of the can.”

That sentiment could serve as the title of the exhibition, as Middleton urges us to get past our apathetic place in a material culture gone “scandalously astray.” Countless found objects are rescued and redeployed to raise thoughts of waste, death, destruction, decay and our facilitating ambivalence. There is an air of finality throughout Middleton’s exhibition, where all hints of an end.

Things are changing at AXENÉO7 under Stefan St-Laurent, who took over as director of the artist-run centre last year. In addition to giving more support to artists who show at the centre — longer residencies, funds to pay for shipping and installation as well as the artist’s fees — St-Laurent is making changes to attract more visitors.

Whereas AXENÉO7 would typically close in summer, St-Laurent has extended Middleton’s show to Aug. 8, to gain exposure during the busy, summer tourist season. The centre backs onto Gatineau’s small canal and the pedestrian/bike paths that run along its bank. St-Laurent has had trees and bushes in the centre’s back yard trimmed back or removed, to make the centre more visible to passersby. He has installed large banners on the back wall that faces the canal.

There’s a small, natural amphitheatre in the back yard, and he hopes to put it to use for outdoor events.

What: Injurious Nature, works by Tricia Middleton
When & where: to Aug. 8 at AXENÉO7, 80 rue Hanson, Gatineau