Ottawa jazz festival a success inside and out 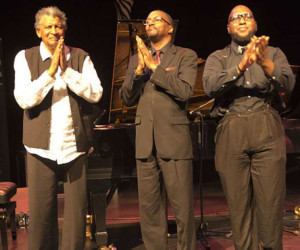 The event, which ran from June 19 to July 1, in many ways functioned as two festivals under one event’s banner. On one hand the outdoor festival skewed to heavily populist shows (Huey Lewis and the News, Steve Miller Band, Pink Martini, Chris Botti, Jamie Cullum) and crossover shows intended to draw younger audiences (The Roots, Beirut, Joel Plaskett, Snarky Puppy). When these main stage shows ended in Confederation Park, night owls crossed Laurier Avenue to take in groovy sounds (The Soul Rebels, Freshlyground and more) in the OLG After Dark series.

Meanwhile, the indoor festival covered the spectrum of jazz from traditional and swinging to cutting edge and challenging.

While such a programming strategy has emerged as the accepted wisdom at the Ottawa and other jazz festivals, it was only five years ago, at the Ottawa event’s 30th anniversary celebration, that the Confederation Park main stage was jammed with celebrated instrumental jazz artists such as Herbie Hancock, Dave Brubeck, Kenny Garrett, Joe Lovano, Joshua Redman and John Scofield.

As of Tuesday night, festival spokeswoman Suzan Zilahi said that the event had tallied about 175,000 visits to its performances

The Steve Miller Band concert drew the largest crowd of this year’s Confederation Park main stage shows, followed by the concert by The Roots, Zilahi said.

She added that the Miller show was the festival’s third best attended show in its history, behind last year’s shows by Aretha Franklin and Earth, Wind & Fire.

Good weather on most nights made for healthy-sized crowds or better in the park, although cold and rain hurt attendance for the Beirut show.

But if jazz fans had fewer reasons to linger in the park that was once their second home, there was no shortage of top-notch music for them in the National Arts Centre, albeit sometimes simultaneously.

The NAC Studio series included many shows that merited different superlatives. Branford Marsalis’ concert was the most intense and drum-forward. The band of pianist Renee Rosnes most extolled the timeless feeling of swinging, with the polished and potent drummer Lewis Nash crucial in that regard.

Pianist Kenny Werner’s trio made music that was among the festival’s most lyrical and uninhibited. The French duo of accordionist Richard Galliano and guitarist Sylvain Luc gave the most charming, intimate and even romantic show in the Studio.

Drummer Antonio Sanchez’s band, a last-minute booking that just the same attracted more listeners to the Studio than it could hold, was the series’s most ambitious show, with the quartet bringing to life a demanding, 70-minute suite.

That series’s two South African participants – pianist Abdullah Ibrahim and drummer Louis Moholo-Moholo gave concerts that were uncompromising and imaginative, but which enthralled in different ways. While Ibrahim’s music was rarefied and chamber-music-like, Moholo-Moholo played bristling free jazz that could be brash or even chaotic, or tuneful and vulnerable from one minute to the next.

Ibrahim and Moholo-Moholo were two shows of five in a special South African music series that was a feather in the festival’s cap, presenting legends and up-and-comers who were little known or exposed to Ottawa listeners. Some of its far-flung artists may not return here for many years, if ever, while other festival artists are more like frequent visitors.

Among them was the quirky, dramatic and sublime concert of Portuguese vocalist Maria Joao and pianist Mario Laginha – a special booking exclusive to Ottawa’s festival by festival programming manager Petr Cancura.

At the Spin Kitchen & Bar in the Ottawa Marriott Hotel, the festival’s jam sessions went into the wee hours each night.

While the music was always worth hearing, few nights were star-studded, due in part to the festival having scattered visiting musicians among many downtown hotels.

The session’s most noteworthy performances happened when world-class guitarist Lionel Loueke, who was not playing in the festival but was visiting family in Hull, dropped by the jam session and sat in with Justin Faulkner, the tumultuous drummer for Branford Maralis, Cancura on tenor saxophone and Beka Gochiashvili, the hard-hitting young pianist with bassist Stanley Clarke’s band, while Ottawa bassist John Geggie was the host and low-frequency foundation.