Jazzfest: Tanya Tagaq will be a stirring experience 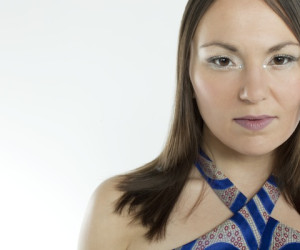 I once had the opportunity to watch Tanya Tagaq perform in what seemed to me the unlikeliest of situations: in the community hall of her own hometown Cambridge Bay, Nunavut, in front of an audience of German tourists sporting thick coats in the middle of August, from a cruise ship making its way through the Northwest Passage, stopping on shore for a chance to learn about Inuit culture.

I was mesmerized immediately by both the intensity of her performance as well as the strangely avant-garde quality of it; this style of music was something that I would have expected to hear in a experimental music café downtown in a big city, not in a tiny remote Arctic community with one local radio station. I could barely breathe, watching her perform. As I watched the grey-haired Germans listen intently to Tanya Tagaq’s vocal swells , gasps, and grunts against the soundscape created by her violinist, I wondered what was going through the tourists’ heads. Did they appreciate the uniqueness of the moment they were experiencing? Did they understand just how brilliant Tagaq’s artistic interpretation was? Or did they mistakenly believe that this was the sort of throat-singing activity that could be found in every Arctic community?

Most people keeping reasonably up to date with the contemporary Canadian music landscape will have come across the name of Tanya Tagaq before. They remember the woman who once collaborated with Bjork, and won the Polaris prize last year and then during her thank you speech declared ”Fuck PETA.”

Unless you’ve actually listened to her albums in depth, however, there’s a tendency to try to reduce her musical style with a simplistic description like “Inuit throat-singing” or “indigenous music”. Make no mistake: her roots make up a large part of her identity and clearly influence her style of expression. But she is much more than a symbolic figure, a flat representation of all first peoples. In fact, her music is not an exact replica of the style of throat-singing the Inuit performed historically, usually by two women as a friendly competition.

Rather, Tagaq has developed it into a new variation of an art form, literally using her voice as an instrument far more than singers usually do. She combines the ancient technique with digital technology, experimental ambient musical influences, and often, orchestral arrangements. Take her album Animism, for example. The entire album is mostly instrumental with very few conventional lyrics, and yet every sound is heavy with meaning and imagery.

The song “Caribou” starts of an a majestic high note: she sings and it sounds bright and hopeful. By the end of the song, however, Tagaq’s voice has transformed into a fierce animal, snarling while the orchestral strings hurl out discordant chords that feel like they can sting. “Rabbit” on the other hand, is playful and light, and you can envision a rabbit running across the tundra. The album ends with the terrifying and haunting track, meaningfully titled “Fracking”, filled with gasping, sobbing, and screaming. It’s more than off-beat; it’s revolutionary.

Tagaq breathes passion and emotion into her work, and she’s just as expressive outside of her music. She has publicly spoken up on social media about sexual harassment, missing and murdered indigenous women, the indigenous right to hunt, cultural appropriation of Inuit traditions, and turning forty. Her raw energy particularly comes out during her live performances, which just cannot be reproduced on CD.  Catching her at the Ottawa Jazz festival will be a stirring experience; you might leave after the show feeling shaken and perhaps even a little disturbed, but with a sense of profound awe about just how much a human being can convey with one voice and a tireless imagination.

Tanya Tagaq will be performing at the Ottawa Jazz Festival on June 30, at 7:30PM on the Laurier Avenue Music Stage, Marion Dewar Plaza. A single day ticket for this show is $52 and can be purchased online.