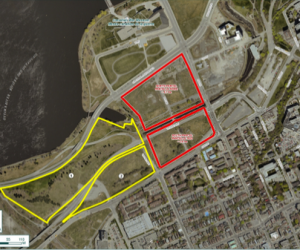 An 11th-hour rule change by the National Capital Commission has touched off a public-relations battle between the rival groups vying to redevelop LeBreton Flats.

Originally, the groups were only going to have last week's two-day open house to present their bids to the public.

But on Jan. 22, days before the proposals were revealed, the NCC decided to allow the two teams to discuss their proposals publicly until Feb. 8.

“We realized how complex the proposals were, so we decided that it would be great for the public to continue to be able to interact with the proponents and hear from then until the end of public consultations,” NCC spokesman Nicholas Galletti said.

That left the groups scrambling to figure out how and where to exhibit their proposals.

The RendezVous LeBreton Group, backed by Senators owner Eugene Melnyk and Trinity Development Group, is showing their plan at the Canadian Tire Centre. Home crowds at three Senators games – Thursday, Saturday and Monday – have a chance to see the bid up-close.

Their rival Devcore Canderel DLS Group is showing their proposal at 340 Albert Street.

“It was a little last minute, so it was a bit of a surprise to us,” Canderel senior vice-president Daniel Peritz said of the extension. “As much as we weren’t as prepared for it as we would have liked to have been, we thought it was a great opportunity to let the people of Ottawa know more about the project.”

The extended time means the Senators have also been able to broadcast details of their bid to their substantial social media following. It was also mentioned during Tuesday night’s TV broadcast of their loss to the Pittsburgh Penguins.

But Mr. Peritz said he isn’t worried about any advantage that may give them.

“We knew that our competitor had a substantial existing social media platform because of the nature of the backbone of their proposal,” he said.

The additional time has given his group the time to show their plan “is not just about an arena.”

“We think that extra time has given people the opportunity to better understand what we’re about, and we think that’s positive.”

After Feb. 8 at midnight, the gag order on the groups resumes and the NCC’s evaluation committee gets to work. The public likely won’t hear the winning bidder until early next year.

The NCC has received more than 4,500 survey responses from the public.

This article originally appeared on metronews.ca on Feb. 4.