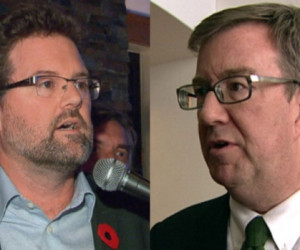 The National Capital Commission’s board of directors amended their bylaws Monday to let the mayors participate – but not vote – in NCC proceedings.

Mr. Watson and Gatineau Mayor Maxime Pedneaud-Jobin have been lobbying the federal government to give them a more formal role on the commission for several years, on the grounds that NCC decisions have a direct impact on city planning.

The issue reached fever pitch last summer as the governing Conservatives pushed ahead with plans to build a massive memorial to victims of communism near the Supreme Court, despite widespread local opposition.

Mr. Watson also opposed the plan, but couldn’t do much without a seat on the board.

Heritage Minister Mélanie Joly had been hinting she would ask the NCC to amend its rules since she took responsibility for the agency last fall.

“We believe this decision will foster a strategic regional alignment in building Canada’s capital as a dynamic and inspiring source of pride for all Canadians,” said board chairman Russell Mills.

This article originally appeared on metronews.ca on Feb. 29