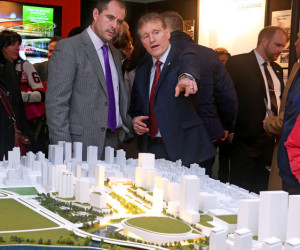 Calling both plans to redevelop LeBreton Flats “very impressive,” the head of one of Ottawa’s most influential business organizations nonetheless didn’t hesitate to endorse the RendezVous LeBreton group’s bid in an interview with OBJ after the proposals were unveiled.


“We’re happy with both bids, but we just see one as being a little more viable than the other,” said Ian Faris, CEO of the Ottawa Chamber of Commerce, which represents more than 700 local businesses.

Mr. Faris said he thought both proposals – the RendezVous LeBreton bid, which is led by Senators Sports & Entertainment, and the Devcore Canderel DLS Group, which is backed by Quebec billionaires André Desmarais and Cirque du Soleil founder Guy Laliberté among others – had significant merits.

Both groups are proposing an NHL-calibre arena as a centrepiece of their redevelopment plans, but only one of them, RendezVous LeBreton, already has a franchise to play in the building. That gives it the edge on the chamber’s scorecard, Mr. Faris said.

“We’ve been following this for 18 months,” he said. “There’s a lot of similarities (between the bids), but the glaring question is the ownership of the Senators. This is a big deal, and the viability is very important to us. Each of them have put an arena as a focal point. I don’t think it can go ahead with an arena that doesn’t have a tenant.

“We want to make sure this happens. We can’t afford to miss another decade or two on developing LeBreton.”

The Devcore Canderel DLS team has stressed it is willing to have “a variety of discussions” with Senators owner Eugene Melnyk about moving the team to LeBreton should its bid be successful. Canderel senior vice-president Daniel Peritz even went as far as to suggest the Senators could own the arena “under the right conditions.”

DCDLS has not approached Mr. Melnyk about any potential partnership because that would violate the terms of the National Capital Commission’s bidding process.

Mr. Melnyk has repeatedly said he has no interest in selling the team and will not move the Senators downtown unless he owns the building they play in.

Mr. Faris said he doesn’t see how the Devcore Canderel DLS vision of LeBreton will work without an NHL tenant for the arena.

“Mr. Melnyk stated very clearly through the media that he has no interest in renting space in a stadium. He wants to be the owner and he feels that’s the best business model.”

Besides an NHL arena, both visions for redeveloping the 21.6 hectares of prime NCC-owned real estate west of downtown share other similarities as well.

One of the defining features of the ambitious LeBreton Re-Imagined plan is an element called the Canadensis Walk (Latin for “of Canada”) that would feature public art and a botanical promenade and would stretch from east to west across the development.

Among its major buildings would be a 20-storey “innovation office tower.” The group says the highrise will be “a vibrant hub for the innovative research work being done in the building” that will complement the activities of the nearby Innovation Centre slated to open later this year at Bayview Yards.

The IlluminNation LeBreton proposal includes plans for 800 hotel rooms, five distinct neighbourhoods with different mixes of housing and retail in each, a heritage aqueduct and a sports and recreation facility open to both able-bodied and disabled users.

The bidders also promise an “Innovation Pavilion” that helps promote Canadian technological prowess through multimedia components, holograms and light shows. The Canada Science and Technology Museum is a partner in the attraction.

Local tourism industry officials said they see a world of potential in both proposals, adding it’s still too early in the process to predict what the final outcome will be.

“I’m advocating that whatever gets built there needs to draw to increase overnight visitation to our community,” said Steve Ball, president of the Ottawa Gatineau Hotel Association. “That really in my mind is the opportunity that needs to be fulfilled. The hockey component is key. Whatever else comes along, I hope it balances opportunities for (tourist) attractions. I don’t care what it is necessarily, but the opportunity in that location to have attractions that help advance our tourism and hospitality industry is critical.”

Ottawa Tourism CEO Dick Brown refused to endorse a specific plan, saying either one appears capable of achieving one of the NCC’s major goals: to revitalize an area has sat undeveloped for more than five decades.

“Both of them make Ottawa a much more interesting and dynamic place for people visiting Ottawa and as a motivator to bring people to Ottawa,” he said.

Mr. Brown said he liked the idea of having an arena, museums and other tourist attractions all centred in one easy-to-navigate district, much like Toronto has with the CN Tower being located right near the Ripley’s Aquarium of Canada and Rogers Centre.

Invest Ottawa CEO Bruce Lazenby said he was encouraged that both groups have chosen to make facilities devoted to technology and innovation prominent in their proposals.

“It seems like both teams have really done their homework,” he said. “Pick either one, it would be a winner. The fact that they’re picking innovation (as a theme) for the LeBreton Flats area just makes me a happy camper. The more innovative we are, the more we’re going to attract and retain some of the world’s most talented and innovative people. That’s what we need to drive our growth sector. The fact that they’re both promoting innovation is a wonderful thing for the city.”

Still, Mr. Ball said it was too early to start celebrating yet.

“A lot needs to happen in the next weeks and months. This is just the initial (step),” he said. “I would hope (the proposals) would continue to evolve. Both presentations suggested that this was an evolution over a long period of time.”

Jonathan Westeinde of Windmill Development Group, one of the partners in the RendezVous LeBreton bid, echoed those thoughts.

“To say we’re going to scrap this and start all over again and not really know if you’re going to get the same kind of energy … I would just hope that there’s a commitment (from the NCC) to get one of these across the finish line,” he said.