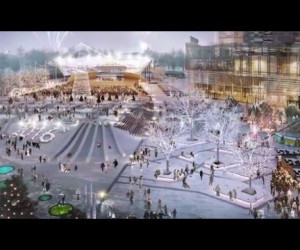 The National Capital Commission is “very pleased” with the community response to the two LeBreton Flats redevelopment plans, a spokesman said.

Public consultations closed Monday at midnight and the NCC said Tuesday that it has received 7,939 online questionnaires from Canadians.

Of those responses, 82 per cent came from the National Capital Region, the NCC said in a release. There were also 11,600 interactions on social media.

“The high level of civic engagement and serious debate on the redevelopment of LeBreton Flats will help guide this historic project to a successful conclusion,” NCC CEO Mark Kristmanson said in a statement.

“A report summarizing the input provided by the public will be submitted to the evaluation committee for consideration in its assessment of the proposals,” spokesman Mario Tremblay wrote in an e-mail. “The report will be made public in April when the NCC board will vote on the recommended proponent.”

Both include new municipal public libraries, mixed-use buildings featuring a mix of residential and retail property, plenty of parks and public spaces and contributions from big-name local architects – Ritchard Brisbin for LeBreton Re-Imagined and Barry Hobin for IllumiNATION LeBreton.

LeBreton Re-Imagined also calls for an NHL arena, but Senators’ owner Eugene Melnyk has repeatedly said he has no interest in selling the team or moving it to an arena he does not own.

-with files from David Sali