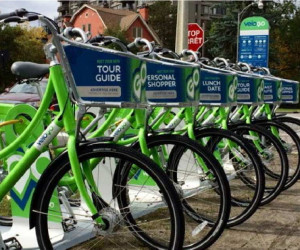 A new bike sharing business will launch Tuesday when VeloGo rolls out its 300-bike fleet in central Ottawa and Gatineau.

The company held a soft launch last fall when they demonstrated their "Smart Bike" technology. The bikes are each equipped with GPS tracking and a lock, allowing customers to reserve the bike from a smart phone or with a membership card available online or at some kiosks. They unlock it using a four-digit PIN code and once they’re done, they can return the bike to a docking station or lock it on any public bicycle rack using the same PIN.

Up to 28 stations with bike racks of varying sizes will appear around the city, with boundaries east of Preston Street and west of the Rideau River.

"Within the service, all members have visibility on all the bikes all the time," said John Romero, chief operating officer of CycleHop, a Miami-based company which owns and operates VeloGo. "You just look on your phone and it will have all these little icons on there showing the bikes and where they are and the status … within 90 seconds you can download the app and be on a bike."

CycleHop, which operates bike-sharing systems in Hamilton, as well as Orlando, Tampa, and Phoenix, bought the National Capital Commission’s network of 250 Capital Bixi bikes and 25 locking stations in April 2014. The new bikes replace the Bixis, which limited the rider to certain drop-off points.

"The bixi bikes were operated on a dock-based system," said Romero. "So the only way they can dock is if they return to a proprietary dock … whereas our bikes you can go anywhere you want and the lock goes with them."

The cost to use the new bikes is $2.50 per 30 minutes for single trips; $15 a month to use a bike one hour a day; and $20 a month to use it two hours a day. If the users locks and leaves the bike out of the system area, it will cost them an extra $20. However, if they returns it to a one of the bike stations, they would earn a small credit toward their membership fee.

The NCC had been working since 2013 to sell its network of Bixi stations. In January, its efforts ramped up when Public Bike System Co., the City of Montreal-controlled company that operated Ottawa’s bike-sharing system, filed for bankruptcy protection.

CycleHop’s new VeloGo program has seen numbers delays since the soft launch, but Romero has his fingers crossed that Tuesday will go off without a hitch.

"We’ll be launching Tuesday barring any major hiccups," he said.