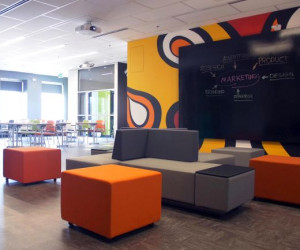 The word "charrette" refers to any brainstorming session where people collaborate on ideas and solutions to problems.

That is one of the many potential uses Antonio Mauriello sees for his new meeting space, La Charrette, which is celebrating its grand opening with open houses that began Thursday and run until Saturday.

"The important thing for the space for me … is that clients come here and do what they prefer to do, from birthday parties to weddings to conferences to business brainstorming sessions, and this is the flexibility of the space," Mr. Mauriello told OBJ recently.

During a 10-year run as owner of pino Wine Studio on Preston Street, Mr. Mauriello said he realized there was a real need in the city for a smaller meeting venue.

So after selling pino to his chef, he decided to fill that need with La Charrette, a 2,500-square-foot space in the new Springcress-constructed building at 460 West Hunt Club Rd. on the corner of Merivale.

"This is not downtown, this is Ottawa West, so we are trying to capture all the outside from Kanata to Manotick and all the Ottawa West community to come here and enjoy this," Mr. Mauriello said. "Definitely near the airport and in a convenient commercial hub, that’s what we’re looking for."

The building was finished in 2013, and Mr. Mauriello was the first tenant, signing a lease in early 2014. Calling it "prime real estate" and "very expensive," he still went for it, saying he and his team of investors believed in the project.

Shortly after, Mr. Mauriello brought in Jessica Plummer of Plumm Design for the first "charrette" in the building.

"We were brainstorming together of different ideas for the space and we first approached it through that avenue (weddings and parties), and it just sort of occurred to us that Ottawa needed something a bit more creative, that’s flexible, that’s business-oriented that can also cater to weddings and birthday parties and that sort of thing," Ms. Plummer said.

Through her previous experiences in the corporate world and in conversations with other businesspeople, she said she discovered that most team-building experiences were, in her words, "beige."

"They had your standard conference energy – nothing that really invigorated you and made you feel like you wanted to participate in what was happening," she said. "You just wanted to get out of there. When is this day going to end? As an employee, that’s not a good thing. As an employer, you don’t want your employees to feel that way."

Ms. Plummer’s research found many successful off-site meeting locations in places such as New York, London and even Alberta. It left her wondering why she couldn’t find anything similar in Ottawa.

"Ottawa needs something like this," she said. "I think our city is about to burst with creativity and we’re ready for something that allows for everyone’s minds to open up and share and move to the next level."

The space is pided into two rooms – Centre Stage, which has a capacity of 100 people, and the Breakout room, which can hold up to 20. The rooms can be booked inpidually or together.

Both rooms feature moveable furniture so the decor can be rearranged to meet clients’ needs. Chalkboards and whiteboards are available throughout the space – even in the kitchen and entrance – so that brainstormers can write down their "Eureka!" moment as soon as it happens.

There is not a lot of beige in La Charrette’s colour scheme, either.

"We’ve called upon colour to evoke creativity, to give a sense of youthfulness, to bring out the child in you, to make you feel a bit more playful," Ms. Plummer said. "We want you to feel that when you’re in the main space."

The Breakout room, which features a lot of grey tones, is the place to get serious and down to business, she said. "Not that you can’t do that (in the more colourful Centre Stage room)."

Mr. Mauriello said he expects to compete for business against hotels, some restaurants and maybe even spots such as HUB Ottawa. That’s fine by him.

"Competition is healthy in business," he said. "It’s nothing to be afraid of. I always say bring me some more competition because I’ll have more challenge. It makes me offer the best to my clients."

The entire space is fully licensed and fully-equipped with audio-visual equipment. Food is not cooked on site, but Mr. Mauriello will arrange catering as required. With extensive contacts in the hospitality industry, he said he can meet nearly all clients’ needs.

The area is also fully accessible, and Ms. Plummer said every effort was made to make the space as environmentally friendly as possible.

Once the grand opening wraps up Saturday afternoon, it will be time to get down to business. Mr. Mauriello said he already has bookings for a wide variety of events.

"We have a teenager party coming up, (and) a business meeting of about eight people that are booking once a month," he said. "They do lunches here. And Italian language classes every Saturday in the Breakout room."